Book: The Magic of Thinking Big 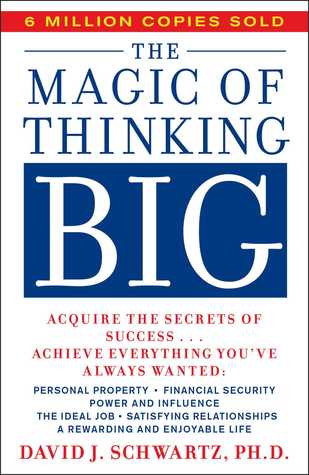 Your age won’t be a handicap unless you make it one.

There is a cause for everything

Accept the law of cause and effect.

The old “it’s-only-in-your-mind” treatment presumes fear doesn’t really exist. But it does. Fear is real.

Fear closes your mouth when you want to speak.

Fear — uncertainty, lack of confidence — explains why we still have economic recessions. Fear explains why millions of people accomplish little and enjoy little.

No one ever does anything worthwhile for which he is not criticized.

people are alike in many, many more ways than they are different

Underneath he’s probably a very nice guy. Most folks are.

Most of young people seem to define the word success as synonymous with security.

To think big, we must use words and phrases that produce big, positive mental images.

Big thinkers train themselves to see not just what is but what can be.

People naturally pay more for acreage and an idea than they do for just acreage.

Look at things not as they are, but as they can be. Visualization adds value to everything. A big thinker always visualizes what can be done in the future. He isn’t stuck with the present.

It’s surprising how people sometimes are blind to potential.

People who don’t have much look at themselves as they are now. They just see a miserable present.

I’d see a nobody and I’d be a nobody for the rest of my life.

They have something to say and they feel a burning desire for other people to hear it.

This guy couldn’t sell a dollar bill for 90 cents.

In marriage the big objective is peace, happiness, tranquillity — not winning quarrels.

Capacity is a state of mind.

If you want it done, give it to a busy man.

So often people pretend to listen when they aren’t listening at all. They’re just waiting for the other person to pause so they can take over with the talking.

Big men do not laugh at big ideas.

Trying to learn all there is to know about people by studying one small group is like trying to master mathematics by reading one short book.

Find friends who breathe encouragement into your plans and ideals

People speak without a sound.

Give me a good world or nothing at all.

Put service first and the money takes care of itself.

Don’t try to buy friendship; it’s not for sale.

The most important person present is the one person most active in introducing himself.

DOn’t be a conversation hog. Listen, win friends and learn.

Everything we have in this world, from satellites to skyscrapers to baby food, is just an idea acted upon.

Most of the good ideas come from just getting to work.

Action must precede action. That’s a law of nature.

The most difficult problem in life was getting out of a warm bed into a cold room.

Before you start out, know where you want to go.

A man is not doing much until the cause he works for possesses all there is of him.

Every human being must keep an interest in life just to keep living.

The person determined to achieve maximum success learns the principle that progress is made one step at a time.

Anything that improves thinking ability is education.

Leading universities require professors to lecture as few as five hours per week so that the professor has time to think.