Book: The Origins of Virtue 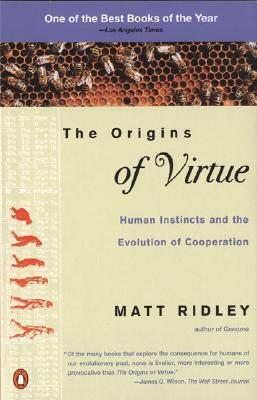 None of your ancestors die celibate.

Animals (and plants), he concluded, are designed to do things not for their species, or for themselves, but for their genes.

Usually the genetic and the individual interest coincide — but not always.

If the knowledge of torture of others makes you sick, it is a case of sympathy. It can be argued that behaviour based on sympathy is in an important sense egoistic, for one is oneself pleased at others’ pleasure and pained at others’ pain, and the pursuit of one’s own utility may thus be helped by sympathetic action.

The relationship is entirely harmonious; pregnancy is a cooperative effort.

Mother and child are still basically cooperating in the business of rearing the child.

The organism can be conceptualised as an entity which will progressively self-destruct from the moment of its formation.

Back when everybode was a peasant everybody was a jack of all trades.

By gathering rare and protein-rich meat while his wife gathers plentiful but protein-poor fruits, the human couple gets the best of both worlds. No other primate exploits a sexual division of labour in this way.

Society can be greater than the sum of its parts.

So we all pay the collective price of individualism.

Cooperation is a frequent feature of human society; trust is the very foundation of social and economic life.

Its retaliation discourages the other side from persisting whenever defection is tried. Its forgiveness helps restore mutual cooperation. And its clarify makes it intelligible to the other player, thereby eliciting long-term cooperation.

Trivers assumed that animals and people are usually driven by self-interest yet observed that they frequently cooperate.

The answer is roughly the same as an amoral New Yorker would probably give when asked why he bothers to pay his illegal-immigrant cleaning lady rather than just fire her and get another one next week: because good cleaners are hard to find.

But the lesson for human beings is that our frequent use of reciprocity in society may be an inevitable part of our natures: an instinct.

It simply develops within us as we mature, an ineradicable predisposition, to be nurtured by teaching or not as the case may be. Any why? Because natural seleciton has chosen it to enable us to get more from social living.

Yet given a full chance to act in his own interest, nothing but expediency will restrain him from brutalizing, from maining, from murdering his brother, his mate, his parent or his child. Scratch an ‘altruist’ and watch a ‘hypocrite’ bleed.

Large, cosmopolitan cities are characterized by ruder people and more casual insult and violence than small towns or rural areas.

You can be as rude as you like to strangers in New York, Paris or London and run only a minuscule risk of meeting the same people again (especially if you are in a car).

Life, it believes, is not a zero-sum game: my success need not be at your expense; two can ‘win’ at once.

It makes better sense to want little and thereby achieve all they want.

Every gift horse was examinated carefully in the mouth and found wanting.

Gifts are given with an element of calculation, and his recipients knew this as well as he did. There is no such thing as a free lunch.

Paradoxes aside, suffice it to say that the human instinct to reciprocate a gift is so string that gifts can be used as weapons.

Giving bood and working in Rwanda both enhance your reputation for virtue and therefore make people more likely to trust you in prisoner’s dilemmas. They scream out ‘I am an altruist; trust me’.

They admire the disinterested altruist; tales of such people’s selflessness become legend.

Biology is a science of exceptions, not rules; of diversity, not grand unified theories.

Those who prefer to believe that dolphins are somehow mystically perfect, peaceable and generally holistic had better stop reading here or risk losing their treassured preconceptions.